THE MUSIC OF JAPAN

Japan is a country made up of several islands in the Pacific Ocean in Asia.  The music and culture of Japan is vast because the Japanese civilization has been in existence for thousands of years.  Many parts of Japanese culture may be similar to China or Korea, because these countries are nearby.  But many are not, because as a set of islands, Japan has had many years when the outside world remained separate.

The Taiko drums, like the ones pictured above, were first introduced to Japan in 500 B.C.  But now, artists are taking the ancient tradition of Taiko drums and creating a new musical experience combining sport, dance, and drumming.  (see the video on the right

Other important instruments in Japanese folk music include the shamisen, the koto, and the shukuhachi.  The shamisen is a three stringed lute.  It looks like a guitar, but is long and skinny with a rectangular body.  There are simlar two-stringed instruments as well.  The instrument is played with a large pic called a bachi which is shaped like a ginko leaf.  (see the video on the left)  The koto is a flat stringed instrument played with finger pics.  The shukuhachi is a japanese flute made of bamboo or wood.  Look at the pictures below.  Which picture features the shamisen, the koto, or the shukuhachi? 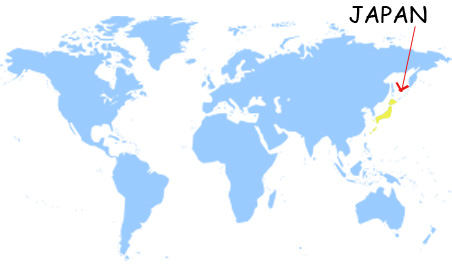